The first senses that we develop in the womb are touch, followed by hearing. INSOUND™ invites you to question this profound relationship between the body and sound. Each sound, music, or noise that we hear is transmitted to our ears by sound waves : invisible movements of molecules suspended in the air which cause our eardrums to vibrate.

By taking this notion and applying it to the entire body, not just the ears, one may realize that the entire body, and more particularly our bones, can receive and comprehend sound through vibration. Having been fundamentally inspired by bone conduction and the spectrum of human hearing, I designed a wearable system which “spatializes” and distributes sound and vibration to the body, whether that information comes from speech, music, or specially fabricated sounds to evoke numerous other future applications.

This wearable, INSOUND™, contains four to eight vibrating units, which are integrated into the fabric of a light vest which can be easily worn by individuals of varying heights and shapes. 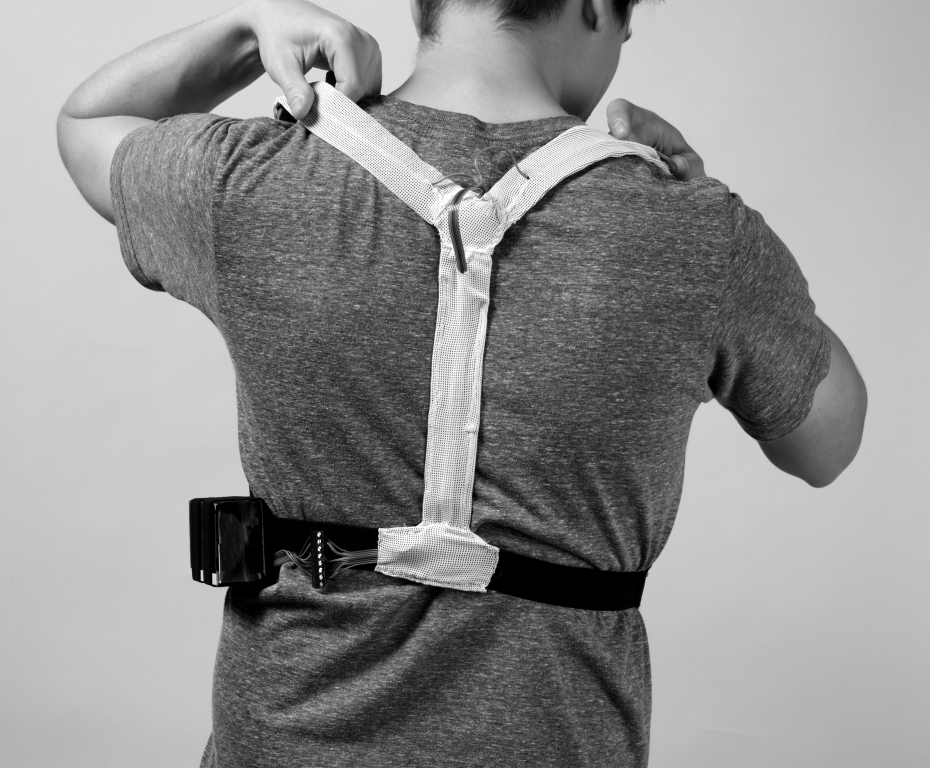 The physical aspect of sound becomes tangibly apparent when, for example, you touch a set of speakers emitting music. It vibrates. This same vibration, coming directly from the sound source, is the type of vibration that I use to create the spatialized haptic patterns that one feels while using the wearable. 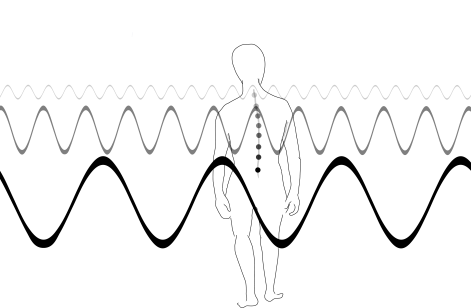 Acoustic vibration is something that one hears and feels, at once. Even if an individual lives with profound deafness, they will still have a tangible experience of sound by means of the tactile sensation on the skin. This allows several perceptive possibilities… hearing, feeling, or both at the same time. The sensation of the vibration depends on the characteristics of the sound itself, for example its amplitude (loudness) and frequency (pitch). The frequency of the vibration has a special relationship with the physical sensation that it produces. The higher the vibration, the higher up on the spinal column that one is able to hear the sound. The lower the frequency, the lower on the spinal column that one may prefer to feel the vibration. If the frequency is very high, it won’t be easy to feel, since the sound waves are so small, but the sound will generally be audible.

I began the project with participative research. Since the object is meant to be used by a large number of people, I wanted to try to see as many people as possible react to bone conduction and sonorous vibration before beginning to truly concretize my idea.

For the very first phase of participative and experimental research, I dismantled a small bluetooth speaker, in order to use its inner functional components. I replaced its external box, which normally serves to amplify the sound, with a vibrating unit. This simple device, shown in the gif above, can transmit any type of sound that I chose to send to it, in stereo. I did my first tests in this manner, having my test participants ‘listen’ to different frequencies through the elbow and the spinal column, to get a sense of the variation of sensitivity to vibration from person to person.

This testing device served as a ‘brick’ for the construction of my fully wearable prototypes, one example of which is seen demonstrated in the above gif and video below. These prototypes are currently being developed further.

The principal inspiration for this project comes from my own neurosensory hearing loss. Between the frequencies of 400 and 5000 Hz, I lose a lot of acoustic information due to my ciliated cells within the inner ear malfunctioning (since birth). The human voice range falling between these frequencies, my abilities to communicate and understand were strongly influenced by my hearing loss. However, this “disability” has not proven itself to be a limitation in my life. Rather, the fact that I hear things differently allowed me to reflect on my own acoustic sensibilities which I developed thanks to my hearing deficiency. It has allowed me also to reflect on why I have chosen to pursue sensory-based research inspired by human diversity.

INSOUND proposes a scientific and artistic interrogation of the human ability to “hear” by means of the entire body. What parameters should define the use of bone conduction and its secondary haptic effects? What characteristics of sound should be filtered to best communicate certain acoustic information to the user via haptic stimulation and bone conduction? Finally, is it possible to make this connection between body and technology more “human”, more sensitive, and for whom?

A new sensory capacity such as the one which INSOUND proposes to explore may create a new bridge to one’s body and oneself.